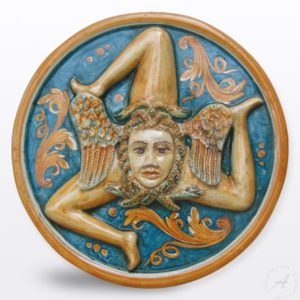 If you visit the island you will be sure to see a Trinacris, symbol of Sicily, everywhere and if you wish to take one of them home you’ll have a large choice, from sophisticated ceramic Trinacria plaques to inexpensive fridge magnets. Of course, we do hope that you’ll go for one of the stunning Sicilian pottery pieces that are handmade for you by local artisans.

Anyway, regardless of your choice, you may want to impress your travel companions and learn something about the origins of the Trinacria or Triskelion and some fascinating stories surrounding the birth of Sicily and its three-legged symbol.

Allow me the pleasure to start from what I like best: the stories.

The three nymphs – the birth of Sicily

This is one of the most ancient stories. A long time ago, three nymphs danced all over the world. They stopped where nature was most luxuriant and collected lovely stones, juicy pieces of fruit and handfuls of fertile soil.

One day they reached a region with a wonderful clear blue sky and they fell in love with the place. Their dance became even more graceful and they decided to throw into the sea everything they had collected around the planet. The water shone and produced an incredible rainbow.

From the waves, a new land surfaced that was splendid, fragrant and colorful. The new island had the shape of a triangle, whose three capes were exactly under the feet of the nymphs.

Colapesce – the hero of Sicily

Another story I love is Colapesce.
Nicola, nicknamed ‘Cola, was a young boy from Messina who loved swimming. He actually spent most of his day in the water, so much so that his body changed and he became more and more like a real fish (pesce), diving at great depths without any effort and staying underwater for many hours.

The boy was very popular because he helped the sailors to avoid the dangers at sea and he always came back to shore with a great story to tell about the treasures lying on the bottom of the sea.

When King Frederick II learned about Colapesce’s extraordinary skills, he sailed to Messina to meet him off the coast. The sovereign threw overboard a golden goblet and asked the kid to dive and bring it back. Colapesce did not waste any time: he plunged, came back promptly with the precious goblet and narrated the wonderful submarine landscape he had just admired.

Impressed, the King asked the crew to sail where the water was much deeper and threw overboard his crown. It took Colapesce two days and two nights to find the crown and when he came back he told Frederick II that he’d discovered that the island of Sicily rested on three columns: the first was intact, the second was chipped and the third was about to break.

Frederick II was now even more intrigued and decided to throw into the water one of his rings. This time Colapesce hesitated because he sensed that he would not come back. At last, he decided to go and said: “Give me a handful of lentils. If you see the surface, you’ll know I am not coming back”. A few days went by without any news, then the King saw some lentils and his ring return to the surface. That’s how he learned that Colapesce had decided to stay under the sea and take on his shoulders the broken column.

Ever since, whenever an earthquake shakes the island the Sicilians know that it’s the poor Colapesce being tired and moving the broken column on his other shoulder.

Now that you know that Sicily is something more than a beautiful tourist destination, you are in the right mood to learn about its symbol.

Trinacria – the three-legged symbol of Sicily

A ceramic plaque with three bent legs and three wheat ears surrounding the head of Medusa is widely known as the symbol of Sicily.

In Italian we know it as Trinacria, three capes, that is how the Greeks named the island thousands of years ago when they circumnavigated the island for the first time and realized that it was shaped like a triangle with three beautiful ends: Cape Pachino, Cape Peloro and Cape Lilibeo.

Triskelion is also a common name for the symbol of Sicily. It originates from the Greek “three-legged” and it obviously refers to the three bent running legs, whose meaning is not at all clear. Some scholars have written that the Spartans used to have this graphic sculpted on their shields to make the enemy aware of their strength. Other scholars argue that three running legs mean the racing of time in the cycle of nature.

Right at the center of the Sicilian symbol, we can identify the head of Medusa, with her snake-haired head and golden wings. Don’t worry though: she is not meant to turn the island’s inhabitants or the guiltless visitors into stone. Instead, the Medusa represents the Goddess Athena of ancient Greek mythology, the Patron Goddess of the island.

Added to the graphic by the Romans, three wheat ears surround the head of Medusa. They celebrate the extraordinary fertility of the island of Sicily that at the time used to be the granary of the empire of Rome.

8 thoughts on “The three-legged symbol of Sicily: Trinacria”