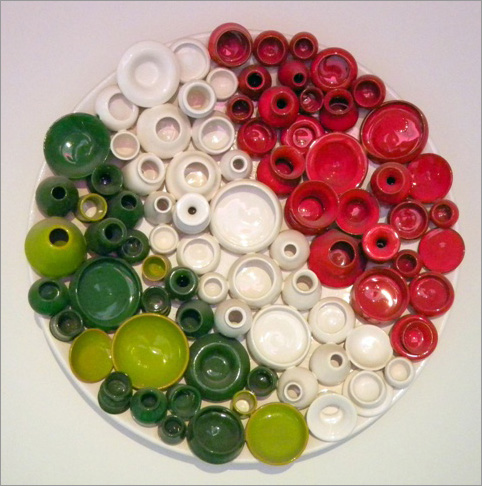 My first stop was at the Terre d’Arte Gallery, in Via Maria Vittoria, one of the few art galleries in Italy specializing in ceramics. I met the owner, Nino Rigano, a man with an extraordinary knowledge concerning Italian art ceramics. It was truly a pleasure to get to know him and I regret I didn’t spend more time in the gallery!

I spent a whole day at the Grandi Officine Riparazioni, enjoying the amazing exhibitions about the past and future of Italy. Guided by my instinct and a quick preliminary research I made my way thru the Galleria delle Botteghe, a space hosting Italian creative excellence in arts & crafts. The first object that I caught sight of what a red round vase with a bizarre animal on top. No need to read the label. It was a piece of Mirta Morigi: her style is hard to mistake. I also noticed an unlabeled wall plate with red, green and white bowls pasted on it which I’m sure was also made by Mirta.

A Castellamonte stove stood in one corner: a solid, austere representative of the ancient tradition of the city in the making of ceramic stoves. 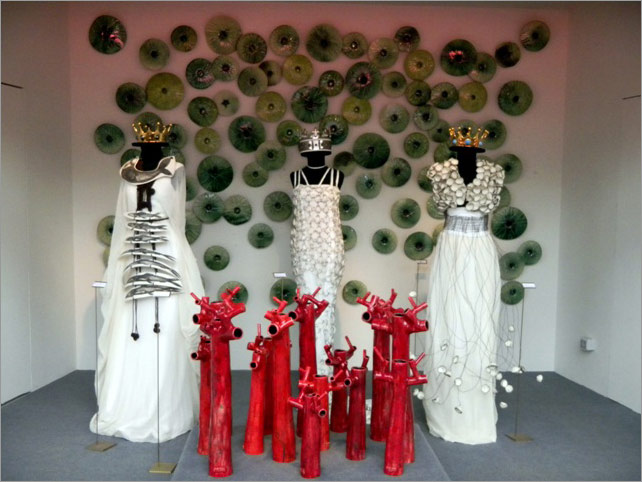 One of the stands or bottega hosted the works made by Elica, a design studio from Faenza and Bologna. Elica is the name that two established artists, Carlo Pastore and Elisabetta Bovina, have been using to label their works since 1995. They combine ceramics with other materials (glass, wood, textiles), designing and producing furniture, jewels, sculptures, decoration accents and home furnishings, (almost) all of which were represented in their bottega: three mesmerizing dresses, a large group of vases from the collection “Venosi” and the fascinating wall installation “Nymphea”. 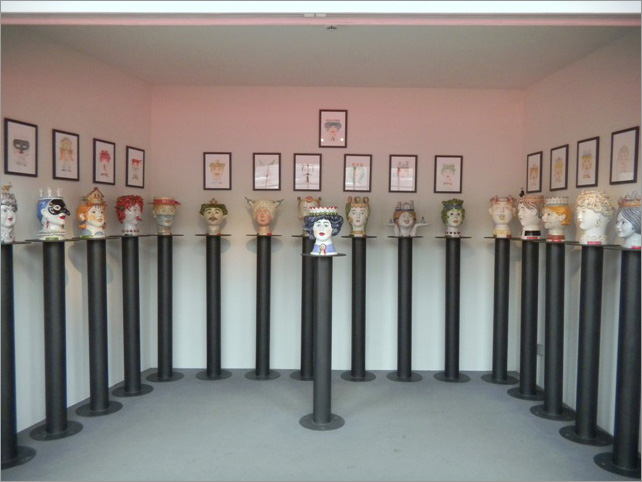 Another bottega hosted “Unity in Diversity”, Ugo La Pietra’s art project. I had already watched some pictures of the ceramic heads representing Italian regions and I kind of gave them for granted… but no, the “ensemble” is so powerful and, at the risk of sound irreverent, so FUNNY. Although every head proudly asserts its distinctiveness, all together the pieces celebrate Caltagirone pottery heritage and its successful attempt to evolve while keeping in touch with tradition.

After the Galleria delle Botteghe I entered the exhibition Il Futuro nelle mani. Artieri domani (The Future in the hands. Artificers tomorrow), hosted in a huge open space. Dedicated to applied arts, the exhibition echoes the International expos of industry and work held in Turin in 1911 and 1961 and features Italy’s finest crafts and designers’ and artists’ works. 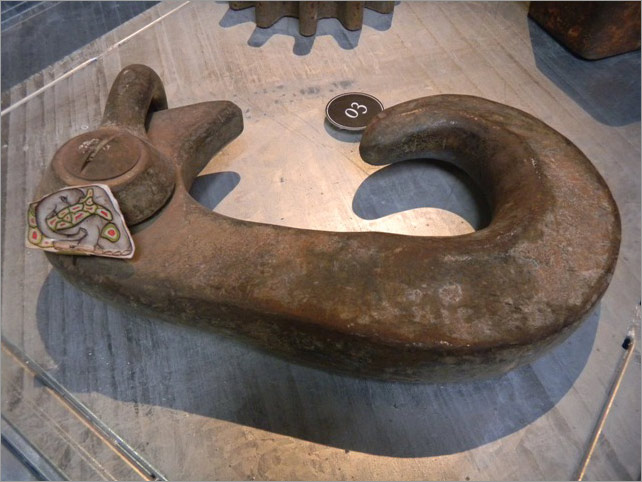 I didn’t expect to find so many Italian ceramic artists there! The first I spotted was Danilo Melandri with his hyper-realistic industrial component that he pairs with miniature ceramic plaques. Fascinated by the huge machines operating in the heavy industries, he values them as much as the great architectural achievement of our past. You can tell he is not at ease with the regular scale!

Also inspired by mechanics, Alfonso Leoni challenged the rules of pottery making. In the Sixties he made nails, bolts, mysterious gears, small armoured cars and tanks that he ironically displayed in opposition to any warfare ideology. Intrigued by the extruder that Alessio Tasca was using in Nove, he used it to make his most famous works, the fists. He died in 1980, when he was only 39 years old, after having assured to his art a place in the Museum of Ceramics in Faenza.

The 360 degree “continuous portrait” of Giuseppe Garibaldi claimed my attention with its bright color. It was a piece made by Claude Aiello, an Italian-French artist who is known to be a real wizard in wheel throwing. A positive example of technical excellence. 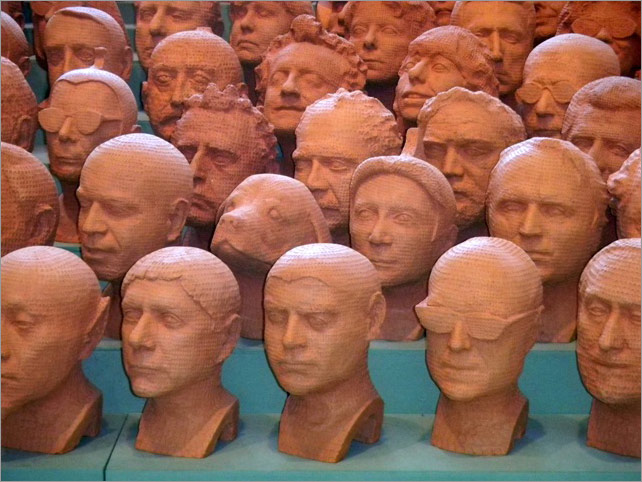 I could not go past Palazzo Madama, in the heart of downtown Turin, without paying a visit to Luigi Mainolfi’s ceramic installation “Turin looking at the sea”, set right at the top of the ceremonial staircase of this prestigious building. Mainolfi is known as one of the most relevant post conceptual Italian artists. Since 1996 he has been making ceramic portraits of his friends and acquaintances: actors, writers, artists, photographers, collectors, craftsmen, doctors, lawyers… 208 busts made of Castellamonte clay that play with the traditional terracotta portrait stereotype. Tiny doors and windows are engraved on every bust: it’s the urban landscape of Turin leaving its imprinting on its citizens. All of them looking at the sea… 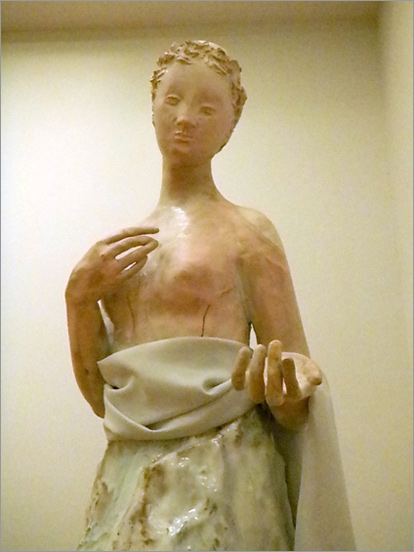 A visit to the Modern Art Gallery gave me an unexpected gift (I love unexpected gifts!): the permanent collection had just been rearranged and new works were on display. Among them two breathtaking ceramic sculptures made by Fausto Melotti, both titled “Little Woman”. Fausto Melotti (1901-1986) is one of the most important Italian artists of the 20th century. Ceramicist, painter and sculptor, he fell in love with clay in 1942 never stopped using it to nourish his creative expression.

Well … what else? An invitation to visit Turin before November 2011. Believe me, it’s a real treat.