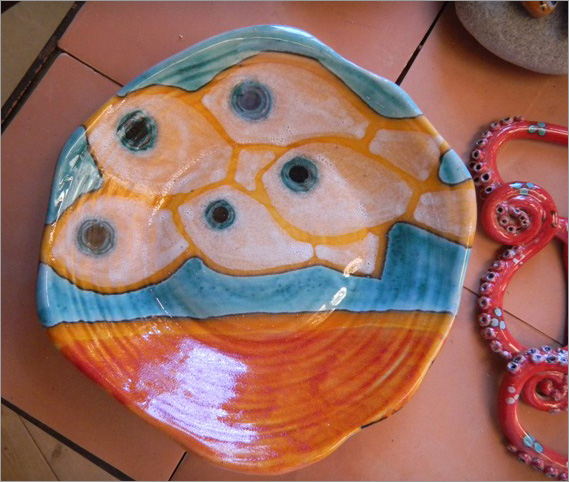 A hot morning in Sicily. The road ran along one of the most fascinating beaches of the island, Baia Santa Margherita. A colorful signpost convinced me to turn into a narrow dirt road that seemed to point straight to a steep red mountain facing the Mediterranean Sea. After a while I saw on my right a brick hut with a shadowy porch: Toti Taormina’s studio lost in the middle of the fragrance and the colors of the Sicilian landscape.

There were people crowding the tiny wood-paneled “showroom”, where ceramics stood all over the place: on the floor, on the shelves, on coffee tables, hanging from the walls and the doors, inside and outside. In the middle of everything Toti himself, chatting with everybody at the same time.

I joined the discussion – politics, of course, Italians’ favorite subject after soccer – and after a while, everybody left and I was free to ask Toti a thousand questions his works had inspired me.

His works… None of my awful pictures actually captured their real colors, which are full, uncompromised and warm.

When I asked Toti which among his works better summarized his art, he answered “my glazes”. He uses special glazes that he often sprays with an airbrush. The decorative result, though guided by experience and talents, is often highly unpredictable, which adds to the excitement of opening the kiln after the firing and finding out how the glazes interacted with each other and with the underlying design.

After this statement, however, he guided me through his studio works and showed me his sculptures. Well… If in his mind glazes are his favorite field of research, then his hands have a different opinion altogether. The molded and sculped clay wittingly revises traditional Sicilian shapes or interprets myths, legends or religious symbols or simply follows his genius. And the results are astoundingly beautiful.